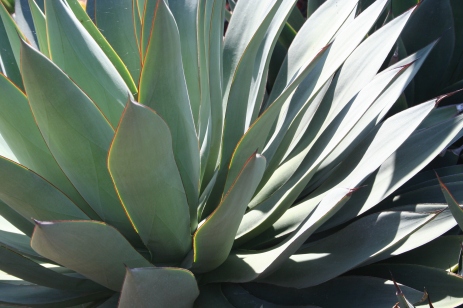 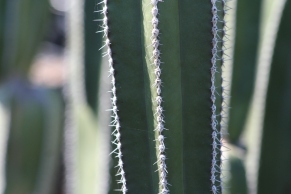 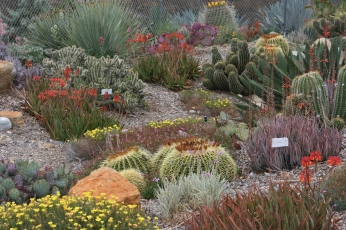 I admittedly am a flower fan…perennials, roses, vines and anything “Wildflower-ish”, but…this fall on a trip to Ojai, I saw a large Opuntia with red round fruits on large oval pads near an adobe style home as we were taking a walk.  The combination was breathtaking.  I always take my camera to capture a delightful or unique moment.  I felt drawn into another dimension entirely as this adobe courtyard compelled me to enter… and tiny ground-hugging wildflowers garnished the setting.  The ambiance was enticing…almost hypnotic in the warmth of the afternoon sunshine.

Sometimes I go out for a walk through the nursery just as the sun is beginning to set and the light catches the spines on the vertical cactus giving it a soft glow.    Before long I’m on the ground, sitting, lying down in the dirt (whatever it takes) with my camera to catch the spell the setting sun casts on the cactus spines.  I watch as it lowers on the horizon…and I catch a shot of the Cacti as they softly radiate a silver or golden glow of gentle radiant light.  It gives them a romantic glow as evening approaches.

I’m also finding the beauty of patterns, shapes and markings… contrasting color of black or brown edging & thorns transform cacti into living art.  As I explore my new found interest in these unique specimens, it feels like a trip through a gallery….paintings, sculpture, creations of beauty.  It strikes me that landscaping with cacti is like painting with plants, gravel, and rock… you just create your masterpiece with a different media.

Agaves are extremely varied in leaf shape and size, and color.  They can be rigid or sprawling, wavy or straight but all bring their own dimension to the landscape.   When combined with verticals and orbs the drama of your “painting” unfolds like the curtain opening for a performance.

Some verticals are silver and slender, others blue with a top-knot of fuzz, and some others deep green with ripples and ribs, but they all have a part to play …adding height, casting shadows or catching the spell of the setting sun, while orbs, like Echinocactus grunsonii, the Barrel Cactus…with spines glowing like you’ve captured the sun itself look absolutely celestial in your landscape, while the green dotted pattern of the Echinopsis hybrid adds the intrigue of its subtle, quiet charm.

I now view a Southwest garden with splendor.  Mixing these astounding architectural cacti with drought tolerant perennials and soft succulents is an art that creates a “masterpiece” in the landscape.

As much as I delight in flowers, love how they dance in the breeze and make bouquets, I think I have found a new secret love.  I’ve become one of those girls who are attracted to the dangerous, good looking, mysterious type…the “Bad Boys” of the cactus world.  I know they are “armed and dangerous”, but I can’t help myself…I’m hopelessly under the “Spell of Cactus”!